I Love the Smell of Dystopia in the Morning

We all know the set-up; the world has gone tits-up and our protagonist has to battle the dictators, cameras, crazies and brain-washed nay-sayers until he or she can find a way out, away or underground to the safety of other everyday normals who just want a peaceful life. This is the realm of the dystopian novel, where humans are oppressed for doing human things, and insanity and illogic prevail. We’ve all read them – 1984, Brave New World, Fahrenheit 451, The Handmaid’s Tale, to name but four. The author selects a problem currently facing society and magnifies it by a million to scare the shit out of us all, but keep us turning the pages, because there is nothing more captivating than the question, ‘What if?

It’s the question that I ask myself every day when I’m writing, but my ‘what ifs’ are usually a lot less political and are full of whimsy, bordering on a carnivalesque kind of appreciation of pushing my characters as far as I can take them (What if she sees Frank Sinatra on the bus, but he isn’t dead; he’s stuck in Brighton and stalked by seagulls? That kind of thing). Mine are the ‘what ifs’ of surreal fantasy, but the dystopian authors employ a far more admirable kind of questioning that brings an eerie realism to what is also essentially fantasy. Their ‘what ifs’ are loaded with an arsenal of terror as we are shown a society that we recognise as our own, destroyed by decisions and issues that we also recognise all too well.

I have thought about writing a dystopian novel. Mine would be set in a world where political decisions are made that change the world while the brain-washed masses are distracted by pointless ‘news’ stories about celebrities and reality TV shows. I also thought about inventing a reality TV show to keep my characters hooked and calling it ‘Big Brother’ – a kind of post-modern, ironic nod to the godfather of dystopia – but surely, it’s too farfetched!

My reason for bringing up the subject of dystopian fiction is that I’ve stumbled upon two more for my list. Yes, there are more than six dystopian novels in the world, but I’ve done some of the classics and now we’re onto the young guns – two indie books and, incidentally, two of the books that made me smile the most this year. I don’t really do book reviews here for three reasons (1. part of my real job is to critique fiction, which makes it feel like work; 2. It makes me feel like I’m back at university: thus, work; 3. I’m selfish), but here’s a quick shout-out so that you can hunt them down and enjoy. 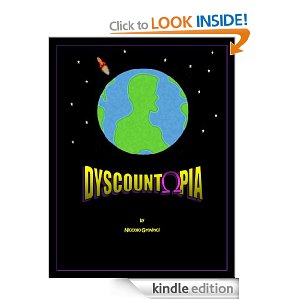 The first is Dyscountopia by Niccola Grovinci. As the synopsis will tell you, this book is set in a world where the planet has been roofed and taken over by a megastore. Everyone works for the megastore, streets are aisles and there is no alternative way of life. What the synopsis doesn’t tell the reader is how fast paced and original this tale really is, how the language punches you in the face and how the neat little touches almost make this world of consumerism-gone-mad believable. 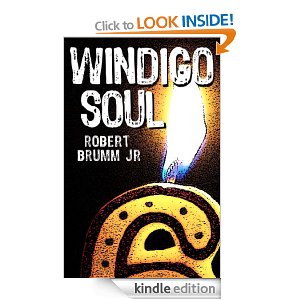 The second is WindigoSoul by Robert Brumm, which is a mashed-up puppy of a book where over-population has crippled living standards and extraordinary measures are put in place to tip the balance in humanity’s favour. These measures, however, include enforced euthanasia at sixty. Great characters navigate a cracking storyline that really capitalises on this thought-provoking setup and makes for a great read.

I think that the most terrifying aspect of the genre is not the worlds that are created by these authors, but those characters that have complete faith in their way of life: the unquestioning, ever-obedient inhabitants who believe in their world because those in power have told them to do so. I’m sure that I don’t need to labour the parallels to real life any further…