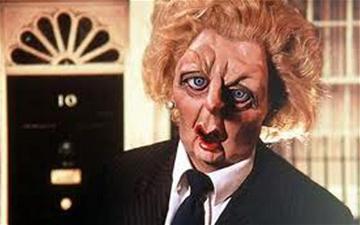 When I was a child, the alternative comedians of the eighties taught me how to hate Margaret Thatcher. She was everywhere, this pointy-faced, vile witch of a pantomime villain, and as a young kid sucking on alternative comedy like a bag of glue, it was my responsibility to boo her on sight. Did I understand the politics? No, not really. It wasn’t until later that I discovered the wide and varied shades of shit that she rained down on Britain from her indiscriminately spraying arsehole. So, learning to hate her in advance was quite lucky for an under-ten like me.


For the rest of the country, the wave of alternative comedy that hit Britain in the 1980s gave voice to the very real frustration that this woman’s reign invoked. Whether it was Ben Elton or Alexei Sayle ranting into the mic, Rik in The Young Ones blaming her for his own shortfalls or the grotesque rubber rendering of Her Ironness in Spitting Image, she was everywhere and it could be argued that rebelling against her resulted in some of the most sublime, energetic and important comedy ever performed in this country. Comedically, this launched the careers of a generation of talent that still endures. Politically, this was a way of reducing Thatcher’s perceived power and potentially rallying opposition.

Of course, this is not the first time that comedy has been used as a weapon; Google ‘Hitler cartoons’ and you will see how ridiculing the führer was an invaluable tool in WWII (No, I am not comparing Thatcher to Hitler!). However, it does seem to me that the eighties brought satire into the mainstream because Margaret Thatcher provoked such a strong reaction in the comedic thinkers of the day. These were the alternative comedians; they were moving away from the mother-in-law jokes of the working-man’s set and the absurdity of the Oxbridge contingency. They were young, pumped and wanted to stamp their size-9 Dr Martins down on what they saw going on around them. They had microphones and it would have been irresponsible not to use them to fight back. You could argue that Margaret Thatcher was just gravy and these revolutionaries would have steered British comedy in a new direction anyway, but I find this hard to believe. She was the catalyst to revolution in the comedy world.

People are now talking about Margaret Thatcher’s legacy. I’m a working-class lefty, so my view is fairly predictable, especially as the Tories are now in power again and David Cameron seems to be only a dress and a pair of high heels away from literally following in her footsteps. Others will claim that she’s the best thing since nostril-hair clippers and the country would be drowned in custard (or something equally implausible) if she hadn’t made it to number ten. With all this talk of her political legacy, it seems trivial to bring this back to comedy, but British comedy (and music for that matter) has never had a muse quite like her, and for someone who is really struggling to find something to praise a dead woman for, this is all I can come up with.

Her comedic legacy is that satire is now a mainstream feature of our lives, whether on stage, TV or radio. We expect our leaders to be pulled up and made accountable by our comedians; we laugh at it, but we also know that something important is happening underneath. Many a truth is told in jest, and for a large section of society who would not consider themselves politically-minded, comedy is an accessible route to information and awareness. Some comedians are still just in it for the laughs and this is great, but many are devoted to giving voice to political injustice and social frustration, and as long as this continues to happen there will always be the possibility of change.
Thank you, Mrs Thatcher (sort of)

Posted by Hayley Sherman at 09:17 No comments: